Publication Opportunities of the LGBTCONF 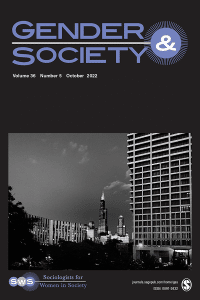 Gender & Society, the official journal of Sociologists for Women in Society, is a top-ranked journal in sociology and women’s studies and publishes less than 10% of all papers submitted to it. Articles analyze gender and gendered processes in interactions, organizations, societies, and global and transnational spaces.

Papers should be approximately 9,000 words, including an abstract (150-200 words), notes, and references. All tables, figures, and appendices must be submitted separately from the paper, and should be submitted together in one supplemental file. Authors should consult the Chicago Manual of Style, Style B, for citations and references, or refer to the Gender & Society style manual, available below. Authors should not number the pages; the online system will number the pages.

Manuscripts should be submitted electronically to http://mc.manuscriptcentral.com/gendsoc. Submitting authors are required to set up an online account on the SageTrack system powered by ScholarOne. Manuscripts that are accepted for review will be sent out anonymously for editorial evaluation. 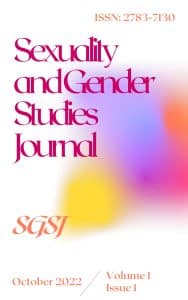 Gender & Society, the official journal of Sociologists for Women in Society, is a top-ranked journal in sociology and women’s studies and publishes less than 10% of all papers submitted to it. Articles analyze gender and gendered processes in interactions, organizations, societies, and global and transnational spaces.

Manuscripts should be organized as follows:

Manuscript should follow the style detailed in the APA publication manual.

Figure captions are inserted immediately after the first paragraph in which the figure is cited.

Tables are inserted immediately after the first paragraph in which they are cited.

Register in the following link and submit your paper on the Journal online Submission platform:

Journal of Language and Sexuality (JLS) The Journal of Language and Sexuality aims to present research on the discursive formations of sexuality, including sexual desire, sexual identities, sexual politics and sexuality in diaspora. Of interest is linguistic work in the widest possible sense, including work in sociolinguistics, anthropological linguistics, pragmatics, semantics, discourse analysis, applied linguistics, and other modes of language-centered inquiry that will contribute to the investigation of discourses of sexuality and their linguistic and social consequences. On a theoretical level, the journal is indebted to Queer Linguistics as its major influence.

*All papers MUST be withing major focus of the journal which is on language in relation to gender and sexuality. *

Passages that are left out in data excerpts should be marked as […].

Works that have been written or edited by more than three authors should first be quoted by listing all authors’ names. For all additional quotations of these works, an abbreviated form should be used: Campbell-Kibler et al. (2002) note…

References in brackets should have the following form (the order of names is determined alphabetically, not chronologically):

Manuscripts should be submitted electronically to  https://www.editorialmanager.com/jols/ 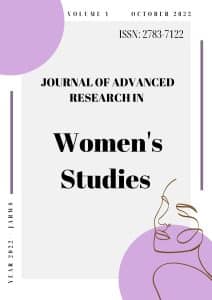 Journal of Advanced Research in Women’s Studies is a global forum for interdisciplinary research contributions in the area of feminism and women’s studies. JARWS welcomes submission of high-quality articles in all areas of women, culture and society, women and health, feminist methodologies, gender and public policy, transnational feminisms, women and migration, women’s leadership and social change, race and women.

Manuscripts should be organized as follows:

Manuscript should follow the style detailed in the APA publication manual.

Figure captions are inserted immediately after the first paragraph in which the figure is cited.

Tables are inserted immediately after the first paragraph in which they are cited.

Register in the following link and submit your paper on the Journal online Submission platform: 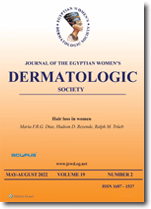 The Journal of The Egyptian Women’s Dermatologic Society (JEWDS) is a peer-review Journal published three times per year. Genetic, molecular, immunologic, microbiologic, biochemical and clinical trials  for skin diseases are the main scope of the journal. Review articles about the hot topics in dermatology are highly encouraged. The editorial board is interested in publishing the following diseases; psoriasis, vitiligo, acne, hidradenitis suppurativa, alopecia, mycosis fungoides and esthetic dermatology. Original articles, review articles, case reports and letters to the editor submitted for publication will be considered for publication after double blind reviewing. Authors do not have to pay for submission, processing or publication of articles.

The text of original articles amounting to up to 3000 words (excluding Abstract, references and Tables) should be divided into sections with the headings Abstract, Key-words, Introduction, Patients and Methods, Results, Discussion, References, Tables and Figure legends.

To read Complete Guideline, click on the below file.

All manuscripts must be submitted on-line through the website https://review.jow.medknow.com/jewd.

First time users will have to register at this site. Registration is free but mandatory. Registered authors can keep track of their articles after logging into the site using their user name and password. The Indian Journal of Gender Studies is a peer-reviewed journal. It aims at providing a holistic understanding of society. Its objective is to encourage and publish research, analysis and informed discussion on issues relating to gender. Often, contributions challenge existing social attitudes and academic biases that obstruct a holistic understanding of the role of the family, particularly of its women members, community and a wider polity. In recent years, the journal has focused on women in politics, violence as a phenomenon, disability, the social organization of the family, women’s livelihood matters, institutional, legal and policy questions, and motherhood and child care.

Authors could send the papers to the following email address and note that they are participants of the Gender studies Conference.

The OPEN ACCESS CHAPTER Publication Fee with Proud Pen is £450, however for those who apply for chapter contribution via this publication opportunity, the chapter publication fee will be waived.

Prepare your accepted conference submission according to the Book Chapter Template and submit it via the submission form. Your chapter submission will be reviewed by book editor for compliance with the quality and scope requirements of the Open Access Book. 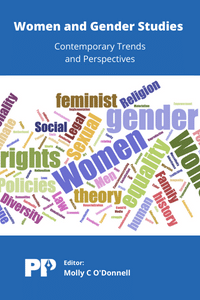 CALL FOR A BOOK CHAPTER

Use this exclusive opportunity to extend your research work and contribute to our upcoming Open Access book, Women and Gender Studies; Contemporary Trends and Perspectives with ISBN 978-1-914266-37-9. Prepare your proposal and submit it via the online submission form. Make sure to stipulate that you agree to publish your chapter as part of the Open Access Book. Upon successful screening by the editorial board to ensure that the proposal adheres to the quality and focus requirements, your proposal will be sent for a double-blind peer-review process. If your book proposal is accepted, you will receive an open-access publication confirmation. You will then work closely with the Book Editor to deliver the final manuscript.

The late bell hooks wrote, “to be in the margin is to be part of the whole but outside the main body.” hooks insightfully treated the liberating possibilities of marginal existence. But, of course, the costs and pitfalls of being in the margins often present themselves in everything from the latest news to the realities of the everyday. Women and Gender Studies; Contemporary Trends and Perspectives will focus on what the margins of gender look like now. What are the trends in activism and scholarship that express change either in the margins or in a response from the hegemony? Are there solutions and movements that have been particularly effective in gaining recognition of marginal existence or effecting positive, real-world change? Are there powerful coalitions that have formed to bring the margins into focus?

We welcome submissions from myriad disciplines and global perspectives, but prospective contributors might treat one or more of the following macro subjects while attending to race, class, gender identity, sexuality, ethnicity, religion, and so on:

+ The future of radical and liberal feminism

Authors should post their submissions online after registering and logging in at:

As the modern society takes a new humane approach to controversial and mistakenly-named “immoral” matters of life, the LGBT subject, has drawn endless arguments and speculation and thus brought about myriad of LGBT discussions.